Ovulation inducing agents are used in two different ways. First, they are used for patients with irregular cycles to normalize ovulation. Secondly, they are used for normally ovulating women as an adjunct to intrauterine insemination. This is because insemination in the natural cycle has poor pregnancy rates. There are two categories of ovulation drugs: oral and injectable. The oral medications are simple to take, inexpensive and have modest results. The injectable drugs are more complex to administer but give far superior results. 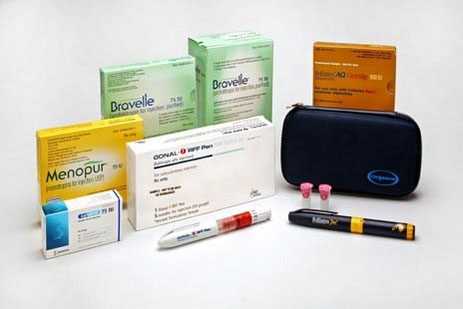 The first line therapy is oral medication such as Clomid or Serophene. These are identical drugs made by two different companies. They are both oral mild medications with modest results. These drugs work by stimulating the release of FSH and LH, which are the crucial hormones that stimulate egg production. The total pregnancy rate with these agents is 35 – 40% after 4 – 6 cycles of use. It is important to know that the lowest effective dose is best. Also most individuals will get pregnant with lower doses within the first few months of use. A typical dose is one to three 50 mg tablets daily for 5 days. We typically begin on day 3 of the menstrual cycle. We typically monitor by ultrasound around day 12 to judge the response to the drug dose. Treatment with Clomid for more than 6 cycles is not useful in most cases. While the drug is administered, response can most accurately judged with ultrasound or progesterone levels. The reason some individuals will not get pregnant with this medication is that it thickens the cervical mucus and thins the lining of the uterus. Approximately 90% of all births are single with this medication.

Side effects include hot flushes and mood disturbance. Occasionally ovarian enlargement requiring a rest cycle may be encountered. The multiple pregnancy rate with this medication should be no more than 7-10%. Most multiples seen here will be twins. The incidence of birth defects with Clomid and Serophene is estimated to be 4.7% which is similar to the 3-4% rate expected in the general population.

Clomid and Serophene are older medications originally approved for use 40 years ago. They are both antiestrogens. Antiestrogens have intrinsic negative side effects such as decreasing cervical mucous and thinning the lining of the uterus. We have been waiting for a long time for new oral medications which would not have these undesirable side effects. While there are no new oral medications which have been FDA approved in the last 40 years, Femara (letrozole) has begun to be widely used for this purpose. Femara is an aromatase inhibitor approved for breast cancer patients whose tumors are sensitive to estrogens. It is not a chemotherapeutic agent. It was quickly discovered that it is a potent stimulator of ovulation. An aromatase inhibitor reduces the production of estrogen temporarily causing the brain to secrete FSH and LH which stimulate follicle development. Femara is available in 2.5 mg tablets. A typical dose is one to three tablets per day for 5 consecutive days. Treatment in our program begins on day 3 (the third full day of menstrual flow). Other programs begin on day 5. We typically will perform an ultrasound around day 12 to check the response to the drug. This information can be used to adjust the dose to obtain the best results. Side effects of Femara include nausea and hot flushes. These side effects are typically less severe than those seen with Clomid.

Disadvantages of Femara include lack of FDA approval and the theoretical risk of birth defects. Without question this is a newer medication and we have less years of experience with it. The drug has a shorter half life than Clomid meaning that it is out of the system more quickly. Femara is given prior to ovulation and potential pregnancy. The half life of Femara is a matter of hours while that of Clomid is days. Studies show the birth defect rate with Femara is 2.4-4.7% which is similar to that in the general population (3-4%). It also may be as low or lower than that seen with Clomid. The use of Femara has grown worldwide. More information will be available soon. For safety reasons if your menstrual period is at all abnormal a pregnancy test should be done before taking this or other ovulation medication.

Injectable Drugs Such as Gonal F and Follistim

Frequently, first line therapy is ineffective. We must then turn to the injectable ovulation inducing agents. These agents are in almost all cases functionally equal.

They can be divided into two groups:

These agents are highly effective and will give cumulative pregnancy rates of roughly 50%. Side effects include various degrees of ovarian enlargement which causes the patient to feel ” crampy or bloated”. Close monitoring will improve results and possibly reduce the number of multiples seen. During treatment, blood work and ultrasounds are used to monitor response. Typically no more than 3 or 4 visits are required per month. When the follicles are judged to be mature, hCG is given to trigger ovulation at a precise time. Ovulation usually occurs 36-40 hours after hCG. In some cases, insemination will be performed around the time of ovulation. Injectable drugs are often effective when oral medications have failed. This is because they often produce better quality eggs and the lining of the uterus is more receptive to the embryo. It is important to know that the goal of injectable drugs is quality not quantity of egg production.

The Role of Artificial (Intrauterine) Insemination

One common question that arises is whether insemination is desirable or necessary when ovulation drugs are used. If we are treating a pure ovulation problem and the sperm count is normal, it may be purely optional. If, however, we have a patient who is ovulating already and we are using ovulation drugs as part of a combined protocol of ovulation and intrauterine insemination, it is a required part of the treatment.

A useful web site for drug information is: http://www.emdserono.com. For some interesting infertility information, and medication demonstrations, go to http://www.fertilitylifelines.com.