The world’s first IVF baby, Mary Louise Brown, was born in England in 1978

We have 24 years of experience with IVF. One of the earliest questions to be raised was regarding safety of IVF for the babies conceived. Like most questions in medicine there are conflicting answers. It is important when looking at the data to compare women with infertility who conceived from basic treatment versus IVF. It is suspected that infertile women may have a rate of birth defects different from the general population whether conception occurs naturally or from treatment. It is also important to distinguish between minor and major malformations. A cleft palate (hare lip) requires plastic surgical repair and is considered minor by some and major by others. A heart problem is always considered major. Also studies from one country may not apply to another. In this section of the web site we will try to present the most recent data on this subject.

November 2005 Issue of Fertility and Sterility

Dr. Klemetti and colleagues reported from the University of Oulu, Finland. This study looked at approximately 4,500 children conceived from IVF, 4,500 from other fertility treatments and 27,000 normally conceived. The major birth defect rate from IVF was 4.27% compared to 3.52% from other fertility treatments and 2.85% from spontaneous conception. Subanalysis showed that this risk was primarily with singleton pregnancies. There was a decrease in risk of major birth defects for multiple girls when compared to the general population.

November 2005 Issue of Obstetrics and Gynecology

Dr. Olson and colleagues reported from the University of Iowa. Their study looked at approx. 1,500 children conceived from IVF and 340 from insemination and 8,400 naturally conceived. The rate of major birth defect for IVF was 6.2% compared to 5.0% for insemination and 4.4% for naturally conceived. The authors concluded that “Infants conceived through IVF have a slightly higher rate of major birth defects.” The authors also concluded that larger studies are needed to determine if the increased risk is secondary to problems inherent in the infertile couple and/or factors associated with some aspects of treatment.

Study concluded that “There is probably no significant increase in congenital malformations.” The authors reviewed previously compiled studies. There is general agreement that men with low sperm counts will pass genes controlling sperm count to their male offspring. It was also reassuring that there was no increase in malformations of any specific organ system. 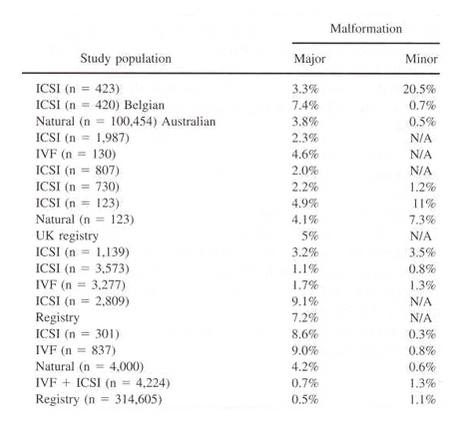 Children born after intracytoplasmic sperm injection (ICSI) are as physically and mentally healthy as children conceived naturally, a study of 5-year-olds shows.

“This study provides further evidence of the safety of today’s treatment methods,” said researcher Professor Andre Van Steirteghem from the Vrije Universiteit Brussels in Belgium at a meeting in Prague.

“This confirms that these techniques can help infertile couples to have the children they have wanted for so long, and that the future health prospects of children conceived in this way are just as good as those for naturally conceived children.”

Professor Van Steirteghem and colleagues are due to present the results of their study this weekend at a conference on infertility organized by the Bertarelli Foundation in the Czech capital.

The study included 300 children born after ICSI in Belgium, Sweden and the USA and 266 children of similar age recruited via schools and national and local birth registration records. The children were an average of 5 years old when the study was done.

A pediatrician and psychologist examined all the children for their physical and psychological development, including behavior. The mothers were also surveyed by means of a written questionnaire to evaluate the amount of stress they experienced raising their children.

Like earlier studies, the researchers found that the average birth weight for ICSI children was noticeably lower–on average 3.317 kg versus 3.420kg. More complications soon after birth were seen, “but these did not have any subsequent effects in terms of chronic illnesses and surgical interventions,” the Bertarelli Foundation said in a statement.

Physiotherapy and speech therapy services had been used slightly more frequently by ICSI children, but height, weight and general physical examinations didn’t show any differences between the two groups of children. The rates of chronic diseases were also the same.

“Although some differences were found in neonatal outcome, results indicate that there were no major differences in the general health and growth of ICSI children at the age of 5 years compared to [naturally conceived] children,” the authors conclude.

The New England Journal of Medicine in March of 2002

Reported on a study in Australia which looked at approx. 1,000 births from IVF and 4,000 naturally conceived infants. They reported a major birth defect rate of 9% in the IVF group[ and 4.2% in the control group. They found no higher risk with ICSI versus standard IVF. The study defined some malformations as major that would be considered by some minor (ex. undescended testes). The major malformation rate in the control group is high. We expect in the US 1 – 2% major malformation rate. Some of the findings are probably a matter of definitions. It is important to note that even by their criteria, more than 90% of the children were completely normal.

A Swedish Study Was Published in the Journal Lancet in 1999

They looked at approx. 6,000 IVF births and compared them to 1.5 million natural births. They found a 5.4% incidence of birth defects in the IVF babies compared to the expected 3.9%. These data were for minor and major malformations.

Without IVF it is expected to be 2 – 4%. This information should be reassuring. We do know that more than 90% of IVF births will be completely normal. If there is an increase in abnormalities, it may be from the infertile state itself and not from IVF technology. Doubtless, more studies will appear in the future. We will continue to keep you informed.