Fibroids are common benign muscle growths of the uterus. The specific location of the fibroids is extremely important in determining their significance. They can be inside the uterus (submucosal), in the muscle wall (intramural) or on the outer surface of the uterus (subserosal). The location of the fibroids can have impact on their significance. A small submucosal fibroid may need to be removed because it is in the area where pregnancy occurs whereas a similar sized subserosal can be left alone. Their location also has implications for the technique of removal. Submucosal fibroids can be removed hysteroscopically (using a scope introduced through the cervix). 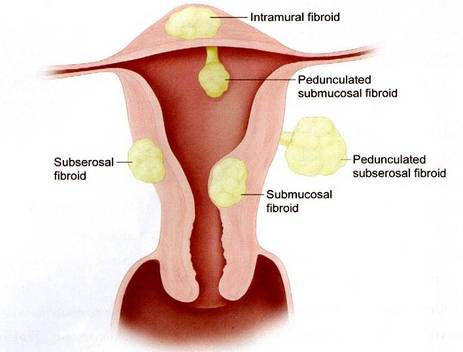 If fibroids get so large that they may impair fertility or reduce a woman’s chances of carrying to term, we may elect to operate in order to remove the fibroids. Common symptoms of fibroids are pelvic pressure, urinary frequency, and heavy, painful, prolonged menstrual periods. Fibroids inside the uterus (submucosal) can cause infertility and miscarriage. Some smaller fibroids may be removed through the laparoscope, occasionally with the help of robotic surgery. Fibroids inside the uterus are removed hysteroscopically. Larger fibroids may require an open procedure to completely remove the fibroids (laparotomy with myomectomy). The incision can be a lower abdominal Pfanenstiel (“bikini”) incision or a vertical incision stretching from the belly button downward. The choice of incision depends on the size of the fibroids and other factors such as the presence of a previous incision and body weight.

Because the uterus must heal after a myomectomy procedure, this surgery may delay pregnancy attempts by three to four months until the muscle tissue heals back strongly enough to support a pregnancy. If a very large uterine incision is required to completely remove the fibroids, it may not be safe to labor later with pregnancy, and an elective cesarean delivery may be recommended in the future.