Ovulation medications are frequently used to treat ovulation disorders. They can also be used with insemination to treat other problems such as endometriosis, male factor and unexplained infertility. These drugs fall into two groups: oral and injectable.

The oral agents are Serophene and Clomid. These are simple, inexpensive agents that give modest results. The pregnancy rates after a few months are 35-40%. Multiple pregnancy rates are 7-10%. Side effects include hot flushes and irritability. Their biggest draw back is that they don’t result in pregnancy in two thirds of cases.

The injectable agents are more potent and effective. The most widely recognized drug is Pergonal. Equivalent drugs to Pergonal are Humegon and Repronex. Newer agents are Metrodin, Fertinex, Follistim and Gonal F. These drugs stimulate egg production in the ovary and then hCG or Profasi is given to release the eggs. These agents contain the active agent called Follicle Stimulating Hormone (FSH). There is a less active agent present in some of them. For 95% of patients the agents are interchangeable. These agents give higher pregnancy rates over a few months (50-60%). They are however more expensive and prone to multiples. Multiple pregnancy rates are approx. 15-20%. Most multiple pregnancies are twin.

For a full discussion of these medications, click here.

Intrauterine insemination (IUI) is also known as artificial insemination. This is a procedure where the sperm of the husband or donor is concentrated by a process known as sperm washing. It is placed in the upper uterus using a small plastic tube or catheter. This is a simple, relatively inexpensive office procedure in contrast to the more expensive and involved in vitro technique. The procedure takes a few minutes. The patient then rests for 5-10 minutes and then returns to daily activity. This is a useful technique in cases where there is poor sperm transport, in unexplained infertility and in endometriosis associated infertility. Insemination is generally used in cycles where ovulation drugs have been utilized. This is because insemination in the natural (unmedicated) cycle produces weak results.

The term intrauterine means “in the uterus” and refers to placement of the sperm within the uterine cavity. Rather than sperm being deposited in the vagina during intercourse, intrauterine insemination (IUI) allows your doctor to deliver high numbers of sperm into the upper reproductive tract just when the egg is ready for fertilization. Not only are more healthy sperm placed closer to the egg, but this technique allows us to bypass any problems associated with the vaginal or cervical environments as well. Insemination is typically scheduled based on an ovulation triggering injection that has been administered to the woman. About one to two hours prior to the insemination, the male collects the sperm specimen, usually by masturbation. 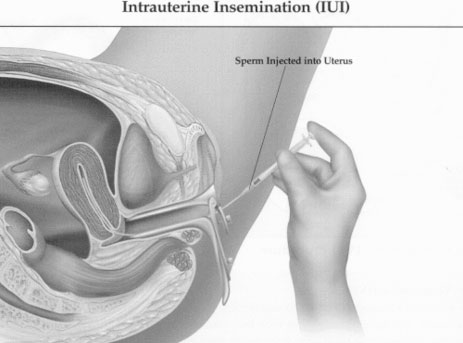 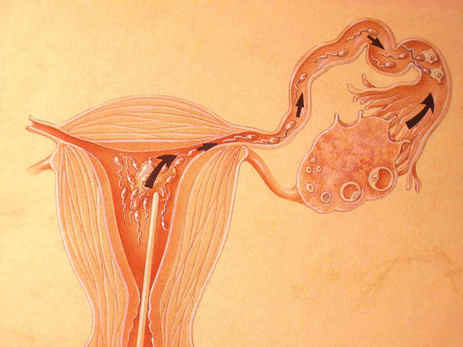 After the sperm is collected, it is allowed to liquefy for 30 to 45 minutes and then undergoes sperm washing. This is a process of centrifugation, which separates the live, moving sperm from dead sperm and other cells in the ejaculate. The insemination process involves placing a speculum (instrument used to see the cervix, as used for a Pap smear) in the vagina. A small, soft, flexible catheter (tube) is then used to transfer the sperm into the upper uterus. The patient is then asked to rest for five to ten minutes before resuming daily activities. Insemination can cause mild cramping, but most women describe it as feeling like a Pap smear when performed by an experienced physician. A small amount of watery discharge from the cervical mucus and the speculum is common after insemination. There is no reason to fear that the sperm will come out when the patient gets up and leaves because the sperm is retained within the uterus by surface tension. A small amount of spotting may also occur after insemination. This is no cause for alarm. Having intercourse the night of insemination may improve pregnancy rates as even more sperm will be available for fertilization.

Most studies have shown that combining ovulation induction for the female with intrauterine insemination gives higher pregnancy rates than timed intercourse alone. Insemination performed for male factor infertility with a woman’s natural cycle is associated with poor pregnancy rates and almost no improvement over intercourse alone. Because of these data, insemination is typically combined with an ovulation-inducing agent for the woman. Ovulation induction and intrauterine insemination are therefore commonly used to treat not only male factor cases but infertility resulting from ovulation problems, cervical factor, unexplained infertility, and endometriosis-associated infertility. This is a simple relatively inexpensive office procedure in contrast to the more expensive and involved in vitro technique. 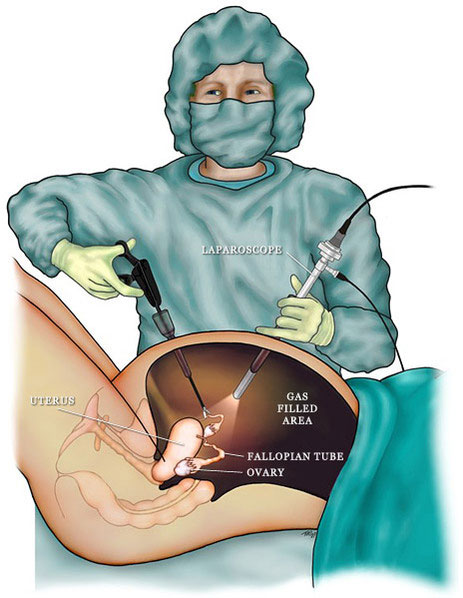 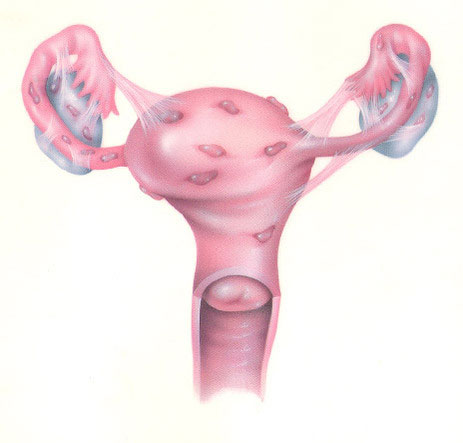 Endometriosis and scarring as depicted above can be very effectively treated with laparoscopy. The fallopian tubes can also be opened using lasers or catheters. We can work inside of the uterus using an instrument called a hysteroscope to remove scarring or fibroids.

Open surgery is still used for reconstruction of the tubes after a tubal ligation procedure. Tubal reversal gives excellent results in many cases. For a full discussion of open microsurgery, please look at the tubal reversal section.

Surgery gives good results if there is mild to moderate disease. If there is severe scarring or endometriosis, in vitro techniques give superior results.

The image below shows endometriosis of the left ovary. 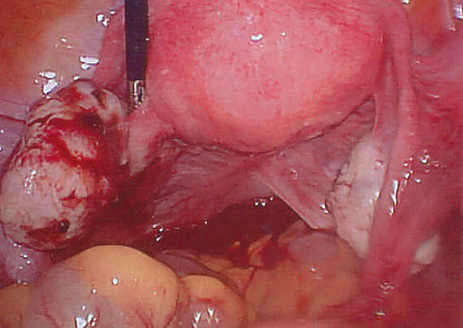 Endometriosis of the left ovary

Read more about In Vitro Fertilization

There is an entire section of our web site devoted to PCOD. PCOD is a condition which involves irregular menstrual cycles, infertility, frequently also increased body weight and excessive hair growth.